Top Series and Movies based on weddings

You must be searching for series and movies based on weddings all through the internet, speaking to your friends and family for suggestions but still confused about how to plan and what to do? Planning a wedding can be very strenuous; right from the perfect dress to choosing the ultimate wedding venue it needs a lot of brainstorming and involvement.

I have an idea that makes your life easier, wear your comfy PJ’s, get a bucket of popcorn, make your self cozy on the couch, and put on a movie or series. But make sure these films involve a romantic wedding so that you can get inspirational ideas. Do not forget to put a tissue paper box beside you because those awe-spiring movies based on weddings will make your eyes water, this may be because of the oozing love or emotional roller coaster ride that these films offer.

Here are some series and movies based on weddings that will give you inspirational ideas to plan your wedding.

These shows not only showcase the elegance of the wedding but also keep you hooked through their entertaining plots.

1. I Want THAT Wedding- Take inspiration for planning your wedding

This UK based show which is streaming on Amazon Prime Video and TLC help the newly engaged couples to figure out their dream wedding. The show revolves around how the wedding planners conceptualize their wedding in three different ways with the focal point on the budget. The first one is the bride’s desire and how much she wants to spend; the second one is, of course, the groom’s budget, and the last one is the median of these two. Till the end, the couple won’t know the cost of their custom wedding, and at the climax; the couple has to pick the best one among the three. 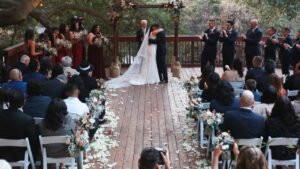 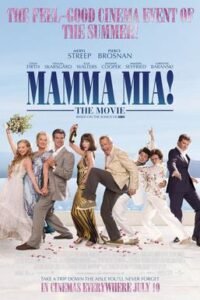 Mamma Mia is released in 2008 under the genre musical romantic comedy. The plot generally revolves around a 20-year-old young bride-to-be who invites three men to her wedding by reading her mother’s diary that there is a probability of one of them being her father.

If you are looking for a destination wedding inspiration then this movie is set in the beautiful greek island of Kalokairi with the turquoise deep blue Aegen sea in the backdrop and of course not to forget the spectacular greek architecture. The wedding of Sophie (Amanda Seyfried) hypnotizes us with its mesmerizing magical moments and exotic location.

This one is certainly one of the most seen movies based on weddings!

An Australian couple set about on a journey which is one year long to explore and experience different traditions of marriage in different locations across the world. This engaged couple will find solace in each other and become closer or break apart is to be seen. 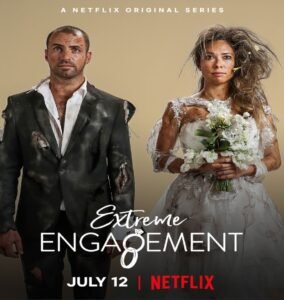 Apart from the story of a couple, if you are a person who wants to have your nuptials in a unique style or a different custom then this show might help you choose the suitable one.

First Aired in 2019, this show is now available on Netflix. 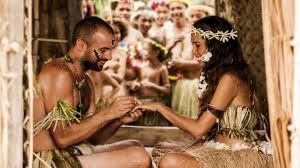 4. American Wedding-  One of the best movies based on weddings to watch. 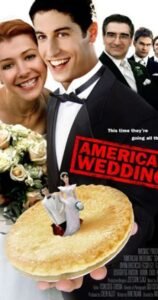 American Wedding is also known as American Pie 3: The Wedding is one of the best movies based on weddings. By the name itself, it is evident that it is the third installment of the American Pie series. Released in 2003 this movie makes you laugh and also cringe at the same time. This is a raunchy film that takes you through a set of events that involves everything from the bachelorette party to the wedding dance.

If you are looking for an inspiration for your wedding dance then what best than American Wedding. The couple dance of newlywed Michelle (Alyson Hannigan) and Jim (Jason Biggs), as well as Stifler (Seann William Scott) and Cadence (January Jones) at the reception at the end of the movie, is spellbinding. 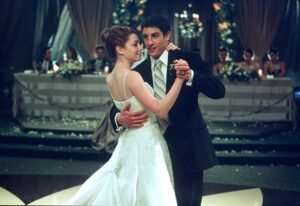 5. Love Wedding Repeat- Netflix movie based on a wedding in France 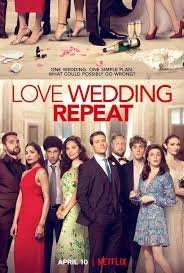 Love Wedding Repeat is one of the movies based on weddings. one Wedding, One Simple plan, what could possibly go wrong’ to know the answer to this question watch the movie Love Wedding Repeat on Netflix. This recent 2020 release is directed and written by Dean Craig. It is a remake of a french movie Plan de Table.

Set up in the beautiful city of Rome this movie shows us the disclosure of three different versions of the same wedding amidst Jack’s (Sam Claflin) endeavor for a perfect wedding to his little sister. The encounter of Jack with his ex-girlfriend, a secret holder who is an uninvited guest, misplaced sleeping will make all hell break loose.

It is an Australian reality show where couples plan ravishing weddings in a small budget. It premiered in the year 2016 on Seven Network. This reality show is narrated by Melanie Vallejo. 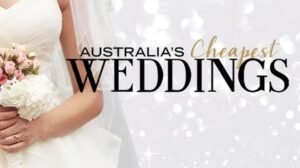 If you are a person who is not a spendthrift and looking for a budget-friendly wedding then this show might give you some insight. 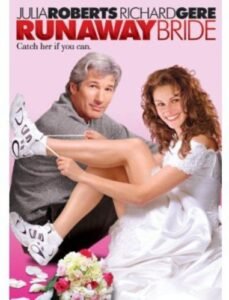 Though Runaway Bride is one of the movies based on weddings is released in 1999, the romance and chemistry of Julia Roberts and Richard Gere is inexplicable. The film is directed by Garry Marshall.

Are you nervous about getting married? Don’t worry you are not the only one, Maggi Carpenter(Julia Roberts) was so nervous that she has left the man she was supposed to marry at the altar several times. This gave her the title “The Runaway Bride”.

Though there are several wedding gown references in this film, the last and the important one is the takeaway. The satin off-shoulder silhouette with the finest beadwork is graceful and glamorous. Getting a perfect dress for your wedding is the utmost priority of any bride, so the story of Maggi might help you find what you are looking for. 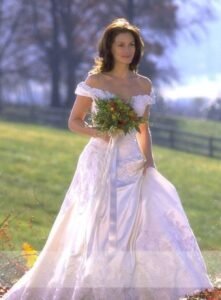 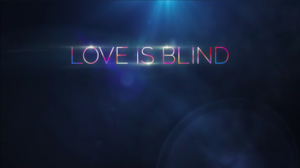 Look for a series based on wedding planning!

Do you believe Love is Blind? Well, maybe this Netflix original show based on a wedding can help us figure out where we stand on that assertion. It first aired on 13th February 2020 and now Netflix renewed it for the second and third seasons on 24th March 2020. It is produced by Kinetic Content and Chris Coelen is the creator. This reality show has its root somewhere on the grounds of other such shows like ‘Married at First Sight’ and ‘The Bachelor’.

This show is a social experiment on 15 couples for three weeks. It features a speed dating format where the singles don’t meet and see each other unless they make that bonding and connection. When they had developed that attachment they propose and go on a date, this almost sounds like a ‘blind date’ concept. Post these three weeks from the reality show, couples return to the actual reality and plan their wedding. Will they work their relationships or not? Will the emotional bond lasts or is it vanished in the world of physical connection will be known only by watching the show.

This show stands as an exemplary to say that certain times connecting with the person emotionally has a greater influence and effect than the looks or physical appearance. If you have any issues with your partner then clear it out before your D-day, this will cement your relationship stronger than ever.

Being best friends we tend to plan every detail about our wedding and wish to marry almost in the same way at the same venue and same day but this can sometimes turn into trouble. Bride wars is also one of the movies based on weddings and is an American rom-com released in 2009 where two best friends turn into enemies to marry at ‘The Plaza’ on the same day. Kate Hudson as Olivia Liv and Anne Hathaway as Emma Allan are the two best friends in this film.

Bride wars film is a symbol of classic decor ideas. In specific the splendid white reception where the centerpieces are teeming with flowers, ivory linens, and silver chairs will not make our eyes blink.No wonder both the friends are fighting for this venue and decoration. 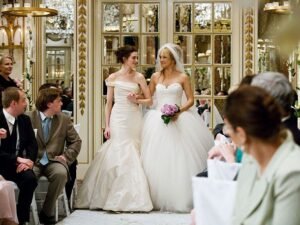 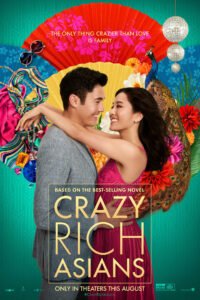 Now here is one of the best movies based on luxury weddings!

Based on the novel written by Kevin Kwan with the same title, this movie released in 2018 and received praise in several aspects. The Crazy Rich Asian is also one of the movies based on weddings An economic professor who is Chinese-American by origin, Rachel Chu (Constance Wu) travels to Singapore with his boyfriend Nicholas Young (Henry Golding) to attend his best friend’s wedding only to realize that they are one of the richest families in Singapore.

The wedding sequence in Crazy Rich Asians gives us goosebumps. It is a perfect blend of modernity and elegance. The guests sitting in a green environment while waiting for the bride who marks her entrance by walking on water wearing the most beautiful wedding dress, the lighting and the charm that graces her entry and the guests standing up to witness this moment with the background song ‘Can’t Help Falling in Love with You’ by Kina Grannis is so surreal. 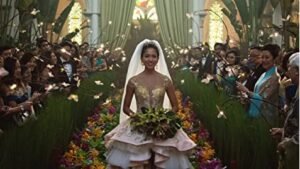 There are many series and movies based on weddings that can contribute ideas to frame your wedding. Every classic will have an epic wedding sequence which makes us awestruck. Right from the floral designs in the Movie Melancholia to the wedding dance sequence on the wedding date, there are many more to explore.

One thing is sure that these unreal and fairy tale luxurious weddings will definitely make you want for one right now. If that is the case contact Blissful Plans to make your dream wedding come true to reality.